Micron announced earnings last night and gave updates on DRAM, 3D XPoint and NAND. Overall numbers were close to estimates. Guidance for FQ2 (Dec-Feb) were lower revenue and earnings due to seasonality. Some interesting items in the presentations.

1) Micron increased NAND bits shipped significantly with slightly increased price. This is a positive. Often we see a big increase in bits at lower price ("we sold out") or flat trend in bit shipments at increased price ("we held out"). Since Micron and the industry overall is losing money on NAND, the prices need to be flat or increasing to get the market healthy. This is a good sign to get to break even and pay for development.

2) Micron continues to press forward on new DRAM technologies. For all the hype about 1Z, the fact is that most of the worlds bits are shipped on 1X or higher. Micron states they they will cross over to have most bits on 1Z/1Y in the next year. A recent Techinsights presentation also stated that Micron is about caught up with Samsung on cell size on new technologies. This has been a push from Sanjay since taking over and is a big success.

3) Earnings are expected to drop again in FQ2 for Micron due to seasonality and Sanjay stated that he is "optimistic" that this will be the financial bottom for Micron. The question is how fast will the upcycle improve and how good will it get this time. In case you were wondering, memory is a cyclical business for mathematical reasons that can be shown with an excel spreadsheet (it has a inherent root cause). For significant increase in earnings, we need to see higher memory prices in 2020. Which requires a shortage of memory. Which requires elimination of some inventory. Which requires supply growth lower than demand growth.

4) Micron floated some interesting number on the future of memory industry. DRAM Bit growth will be 15% in 2020, vs 20% in 2019. NAND Bit growth will be 30% in 2020 vs 40% in 2019. <20% ("mid to high teens") and 30% growth for DRAM and NAND respectively will be the future CAGR. These numbers are lower than historical but are becoming consistent from each supplier. Micron also states that DRAM bits per server will grow 20%  per year. All of these numbers include all of the hyped buzzword technologies. (AI, ML, Neuromorphic, 5G, Autonomous, etc). So again it is nice to have consistent bit growth numbers to plug into spreadsheets (with scenarios as well)

5) Micron gave some updates on NVM technology. Micron announced the X100 3D XPoint SSD earlier in the year and we gave our analysis of how this is built, components, and what the ramp might look like. Other than that, Micron was vague and discussed 3D Xpoint as a promising technology to be developed over the next few years. Micron also announced actions to deal with 3D XPoint which they said is declining in production volume and causing underload charges. At FMS, we presented details on 3D XPoint revenue and manufacturing for the next few years and we have new details since August and what Micron specific impact might be.

On the NAND side, Micron reiterated that 128L will be replacement gate and will have limited ramp on select products by end of Fiscal 2020. Until then, Micron will use existing technologies to support NAND sales. This is a great way to ramp a new technology but IF there is an upturn, it leads to problems on how (or if) to spend capex to meet increased demand... spend on old or new (unproven) technologies.

We give clients inputs on how to monitor all of this and whether actions and reports by companies are supporting or changing the models. Plus we have detailed cost models for all technologies comparing each company.

Posted by MKW Ventures at 11:36 AM No comments:


Chinese and all memory companies make optimistic claims stating 10’s of Billions have been spent. They show cartoons of factories that don’t exist yet or are empty. These claims are easy to challenge as companies track shipments to China and China reports equipment delivered by area. So it is very easy to verify the actual amount of capex and model where it is going. Lots of money is going into Chinese owned memory companies but it is no where close to $30B yet and there are not significant shipments yet.

Help needed: Samples from either technology! THANKS!

We have costs, revenue, cell sizes, performance metrics for ReRAM, PCM (3D Xpoint) and MRAM technologies today. Plus, we have a Product Lifecycle Model that shows where additional technologies are today, when they can be expected to sell in volume and what the milestones are along the way. Nanotube RAM, Ferro-electric RAM, ReRAM modifications and MRAM modifications are technologies that are being developed.

Some topics to discuss:

We will be at IEDM in San Francisco/Bay Area Dec 7-13.  Call or Email to set up meeting to discuss how these technologies will impact markets and how some other projections are based on myths, not reality. 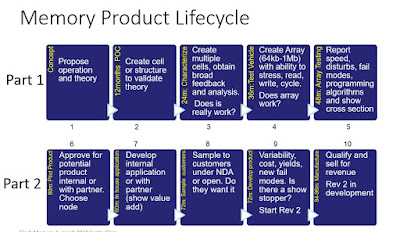 Posted by MKW Ventures at 3:32 PM No comments: