Revenue for Persistent Memory Through 2030

We published some data after the 2020 Flash Memory Summit on Persistent Memory and Emerging Memory revenue.

Based on Plans for CXL/Serial Memory bus, and based on recent feedback from Server and Datacenter companies, and feedback from memory companies, we forecast a revenue stream that is less dependent on new or emerging memory technologies.

Intel will apply its technology to the new bus and that will lead to growth. But other hybrid memory/storage solutions will be enabled by CXL and are desired by Datacenter companies to address persistent memory needs. 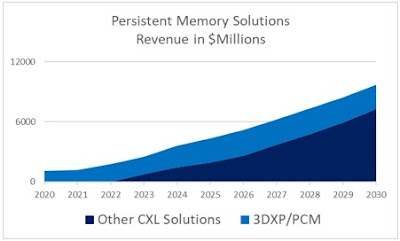 Posted by MKW Ventures at 9:13 AM No comments:

Quick Recap of Supply and Demand in Memory

I want to re-iterate a couple axioms of how memory pricing works. Half the people will say that I am crazy/wrong and it is no longer cyclical. The other half will say “yes we know… stop preaching”. This is for the first half
1)     In perfect balance (never happens). Demand = Supply and inventory is 4-6 weeks (including both customer and supplier). Supply and Demand  bit growth are both 18%. All is well
2)     If people think there will be a shortage, they (Big companies) will buy at least an extra 2 weeks of inventory and they will do this in one quarter. This causes an actual shortage of say 10-20%.
3)     Now there is a real shortage, Spot price and eventually contract price go up. But end unit sales may not have increased much.
4)     People will be put on allocation and ship dates are pushed out. Small companies need to pay Spot price as Samsung wont even take their calls anymore.
5)     This goes on until people get their fear based inventory levels on target. Really fearful companies may even double order knowing they can cancel at last moment.
6)     This continues for a while. demand is adjusted, prices slow adoption and people are not worried anymore. We are have higher prices and extra inventory
7)     Then Cell phone or Datacenter shipments flatten for some small reason and the fear of a shortage disappears. Google procurement is told to cut inventories by 2 weeks or more to get back to target.
8)     There is now a demand drop of 10-20% due to inventory adjustments on top of the 0-5% due to real demand change. Prices Drops and there is no reason to hold inventory so customers cut another week or two off of inventory targets. Suppliers cut prices to ship what they have
9)     Real end customer demand is down 5% and memory supplier demand would drop 20% if not for massive price cuts.
10)  Wait for perceived shortage to appear again.

Actual demand surprise was 0-5% but the impact to memory markets was enormous. And this DOESN’T include supply effect. Guess what happens when you build a fab when that initial shortage happens????
I will wait for the comment “its not a cyclical market anymore, this time is different… you boomers just don’t get it” (OK the last part is just something my kids would say)
Mark Webb
www.mkwventures.com

Posted by MKW Ventures at 3:04 PM No comments:

What is the Future of Persistent Memory???

Next week, the Persistent Memory/Computational Storage Summit will be held. There will be some great topics and I will be on a panel on Wednesday 4/21 at 11:45 to Discuss the future of Persistent Memory.

Micron recently announced that they will not pursue 3D Xpoint Memory and will instead focus on CXL. Since I had a projections for greatly INCREASED 3D XPoint Revenue BASED on CXL…. That was an interesting statement. We showed markets growing from $1B to $4B+ per year on 3D Xpoint.

Some Thoughts (we will discuss at Summit or offline)

1)     3D XPoint, in the form of Intel’s Optane, is BY FAR the leading persistent memory and emerging memory. Nothing is close.

a.      MRAM and ReRAM are used in SOCs but the densities are small (<1Gbit) and this is not really what most of us talk about when we discuss persistent memory (its like NOR)

b.      MRAM from Everspin is also selling in 1Gbit chips stand alone, but again this is much smaller than persistent memory for databases and servers.

Given this, Micron NOT pursuing 3D Xpoint seems to be a huge statement. Why?

2)     CXL is widely accepted as the next gen memory bus. While this could change, it is very important to have a widely accepted bus to keep focus and leverage from large companies.

3)     We assumed that persistent memory would be an emerging memory that is fast and non-volatile and lower cost than DRAM and is accessed with memory commands.

a.      What if we didn’t need ALL of those attributes but some trade offs instead?

b.      What if we had a large memory pool available on a CXL bus that was DRAM and NAND but could be shared and used only when needed. We get large memory availability at lower cost

c.      If the CXL bus allows sharing and re-optimization of memory, does that make up for any other tradeoff?

d.      The CXL bus is flexible and open so people could choose the memory and processor rather than being locked into an Intel architecture. Persistent memory and large scale memory doesnt need to be deeply tied to the memory controller

At this time, Intel still plans to use Optane/3D Xpoint on the CXL bus and offer solutions based on this. Intel is essentially going it alone on 3D Xpoint/Optane echnology. Intel will make Optane at Micron through the end of the year and use its New Mexico Fab as additional capacity with option to increase that capacity over time (we track the site and Intel capacity in our reports)

For more on what the future of persistent memory and Optane is, attend the Summit and contact us\

Posted by MKW Ventures at 10:31 AM No comments: