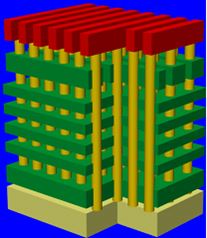 What is the cost reduction from 64L 3D NAND

We just updated our models for 3D NAND, (and DRAM, 3D Xpoint). The results show major impact from 64L shipments

Posted by MKW Ventures at 3:17 PM No comments:


Intel announced more updates on status of their Optane products. I wanted to say launched but then I realized that actually no product is yet available to the public... soon it will be I hope.


1) Enterprise P4800x SSD: Its arguably the fastest SSD in the world depending on which metric you choose. Intel's focus is on low latency... which is important since transactions involving a queue depth of  32 are quite rare. Its also expensive and only shipping in one density and limited quantities to limited customers. It also supports a virtual memory activity where it looks like memory to the server. Still waiting on third party benchmarks but at this point it is fast and shipping somewhere for revenue.

OK its 8-10x faster and the cells last 2-3x as long as NAND. Its still a great drive for certain Enterprise Applications.


2) Intel Optane memory: This was announced to press at same time... but embargoed for a few more days. 16/32GB cache device announced also at CES.

As I mentioned when this came out earlier at CES... caching is a great idea. 95% of the performance at much lower cost... when it works. Intel showed data that when combined with a HDD is improved boot and program loading performance. There is some concern that these metrics were cherry picked but we will see when third party benchmarks comes out (THG???? Anandtech???)

The price was good $44-$77, it makes a difference in performance, and Intel is hyping the heck out of it. If PC OEMS push it... it could be a big deal. I am not sure what percentage of chipsets accept it today, but I will try it out ASAP when it comes out (See... Intel even tricked me into buying a Kaby Lake PC with 200 Chipset!).


This just in... Optane, as a NVMe SSD/Cache is not 1000x faster and is not going to change the world like the steam engine, the internet, or the cell phone (SORRY) ... but it appears to be a option for fast performance in some applications ... if you can buy it somewhere.

More to come when it actually appears!

Posted by MKW Ventures at 1:02 PM No comments:

Is Optane + HDD a good thing? A great thing?

Intel (and PC OEMs) recently announced that sometime in Q2 we can use a 16GB or 32GB Optane NVMe Module with a HDD to achieve SSD like results. Optane module is connected by M.2 to PCIe bus. It is not a DIMM and it does not act like DRAM memory.

Is this a good thing? Is this a great thing? A Couple questions have been raised


1) This is caching again. In a perfect world, caching would make it so that 95% of storage access would be the cache speed. As a person who runs SSDs, hybrid HDDs, HDDs with a SSD cache, I can say this about caching: "its is real fast some of the time" and "it is HDD slow more of the time than I would expect".  Will this version work better? If so, we will have the blazing SSD like performance 90% of the time. What will the benchmarks and boot time say?

2) What will it cost? I have detailed models for how much that M.2 Module will cost including controllers, PCB, BOM components and the 3DXP memory.... we will save that exact cost for later (Call me!)... but what will the price to consumers be? There are two possible options:

a) It will be marked up a ton to account for it being new, rare, and desire to differentiate. I will go with a $160 adder prediction for the 32GB version option.
b) It will be subsidized with a price to push people to convert to the new architecture and help  Intel sell processors. I will go with a $50 adder for 32GB option


5) When can I but this option? According to Intel, it is Optane ready today (but without Optane???).

For actual working, non vaporware Optane, Lenovo says April ... others say June.... others say "later". If Intel doesn't delay it again, and it sells in April, I will be buying that Lenovo PC with 32GB just to say I have been Optaned (or is it Optanized?).